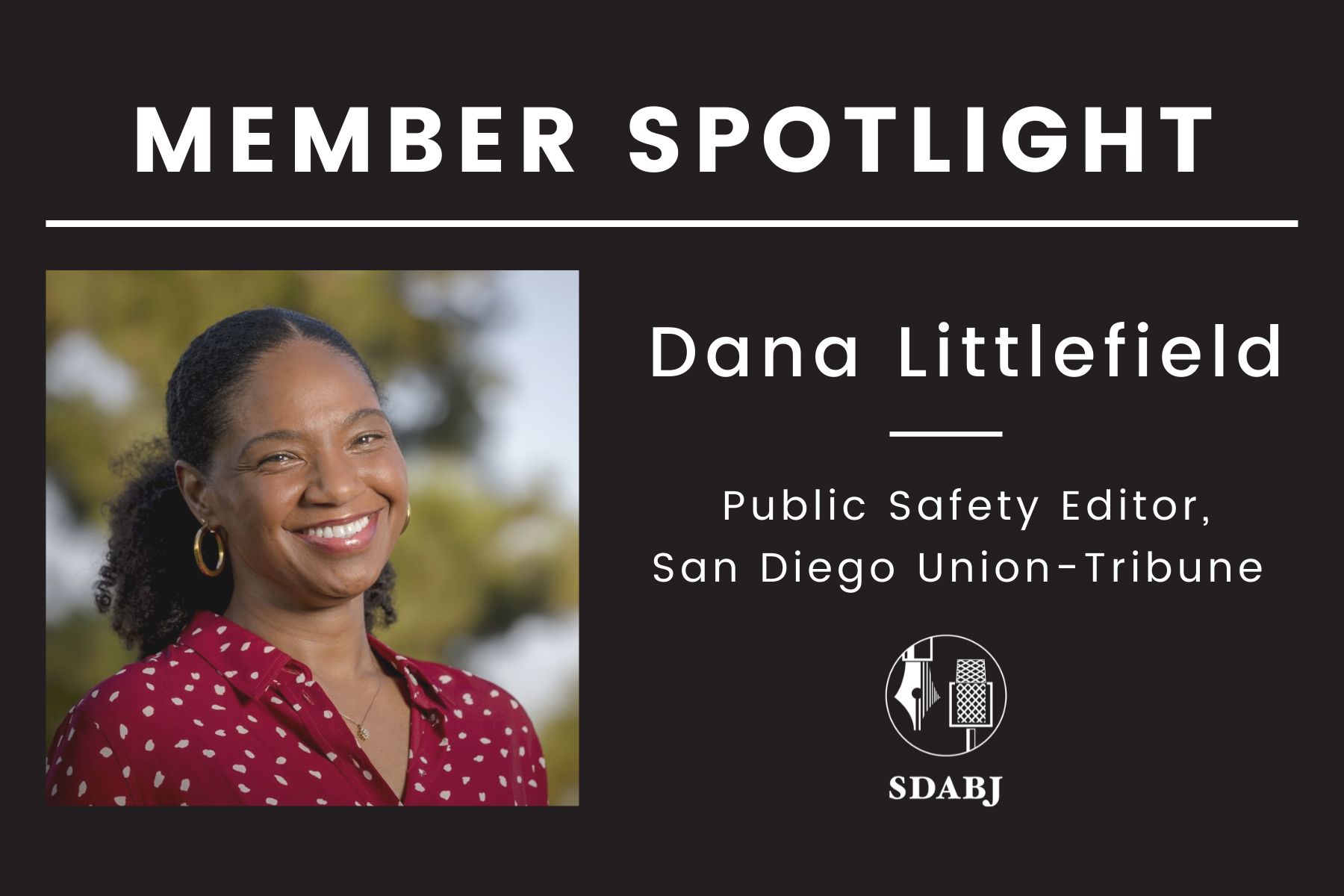 Every month, we introduce you to one of our talented chapter members. Since we are dedicating this month’s edition to SDABJ, we’re highlighting one of their own members.

Q: You were a reporter for many years. Now you are an editor. What was the transition to editor like?

A: To be frank, it wasn’t an easy transition. I have always been grateful for the reporters I’ve worked with, but there were many changes to my team in the beginning: retirements, people moving to other beats, people being moved from other teams to the public safety team without much consultation, the night reporter position was vacant for several months. It was difficult for all involved.

On top of that I had to learn how to be an editor – how to make positive contributions to a story without completely taking it over or being hesitant to point out something that needed changes for fear of offending the reporter. I also had to learn to be a manager: It is difficult to manage the needs of many individuals – at one point, it was a team of seven reporters – while trying to meet the needs of the company. I also had other managers, at the time, who were watching and weighing in on what I was doing. It was a lot to juggle. And most of that has little to do with the news coverage itself.

A: The most challenging aspect is learning how to manage people. It isn’t about barking orders at people. It’s mostly about listening, hearing other people’s ideas and input, and providing what they need to be successful. It’s about working to earn people’s trust. I realize that some of the language I use as a manager can sound quite corny. I speak a lot about “teams” and “collaboration.” In reality, that’s the only way we get this work done — by working together and having each other’s backs.

Q: What is it like to oversee coverage of crime, policing and the criminal justice system at a time when there is a lot of attention on these topics?

A: I always enjoyed covering cops and courts – mostly courts – as a reporter. I covered state courts for about 15 years. It made sense that if I were to become an editor, this would be my area of focus. I have always tried to do stories on criminal justice reform, and I have written much about policing – particularly after the death of Michael Brown in Ferguson, Mo. But like many people of my generation, I had never seen anything – in terms of scale – like the reaction and response after the death of George Floyd in Minneapolis. I took my responsibility of overseeing much of that coverage locally in 2020 and beyond very seriously. I still do. In some ways, my perspective is different as an editor than it was as a reporter. I am tasked with seeing the broader scope of what it is we cover – not just a single story or series of stories. I need to look at the totality of what we cover and make sure it’s accurate, balanced and fair.

Q: You are a member of SDABJ. What do you enjoy most about the chapter?

A: I have always been proud of how well the group works together. We have been lucky in that we really do enjoy each other’s company. We have been fortunate to not have a lot of internal drama that can bring down volunteer groups of all types. I am happy to have been a member of the local chapter for more than 20 years.

Q: You have been a mentor to younger or aspiring journalists, including through SDABJ events such as Pro For a Day. Why is that important to you?

A: I feel strongly that if I’m not working to help the next generation of journalists, then what am I doing here? What is my purpose? Sure, I do my own work and meet my own deadlines, but I care a great deal about helping others in their careers as I was helped – and still am helped – on my career path. Pay it forward. Always.

Q: A few fun questions. What song(s) are you currently playing on repeat and what was the last TV show you couldn’t stop watching?

A: I’m a huge TV and movie buff. Right now I’m watching and re-watching Ozark. I love a crime drama. I’m also a bit of a comedy nerd so I like to watch standup comedy specials (it’s great when the comedian is someone who is new to me) and half-hour sit-coms. Abbott Elementary is a new one that seems really promising.

I love music and I’m hoping to go to some live concerts this year. I love Hip-Hop for sure, but I also like a wide variety of types of music. I can’t say I’m listening to anything in particular on repeat right now. Maybe I’ve been cooped up in front of the TV too long. ?

Q: What would your ideal day off look like?

A: Right now I just need sleep. And maybe a massage.

Dana Littlefield recently oversaw special coverage in the Union-Tribune that paid tribute to women in the legal profession, law enforcement and firefighting.