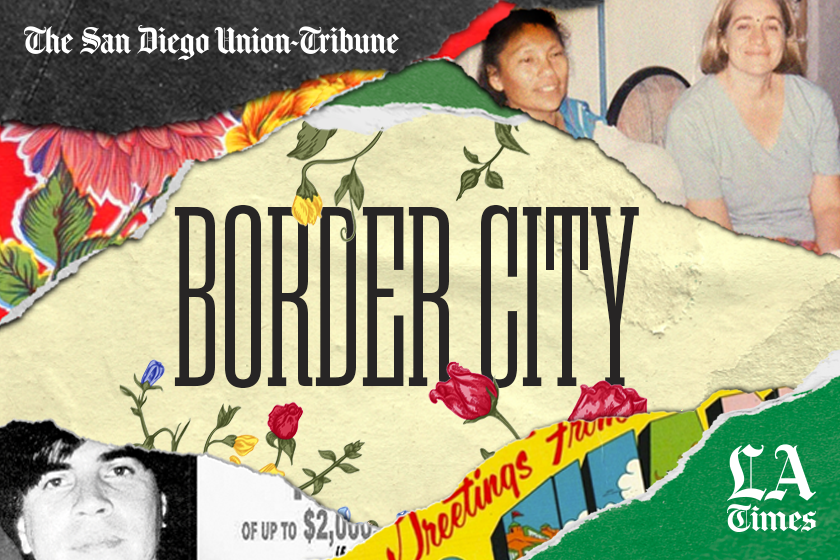 After nearly three decades reporting on Tijuana for The San Diego Union-Tribune, Sandra Dibble traded in her pen and notebook for a mic and headset as she set out to turn her years living and reporting on the city into an eight-episode podcast.

The podcast series released earlier this month, Border City, is as much about the city of Tijuana and the changes it sees from 1994 to 2019 as it is about Dibble’s own path navigating a new place and trying to understand what made her leave a comfortable life in Washington D.C. for a new city she had only visited.

The podcast is personal, especially for a veteran journalist who made a career of reporting the facts with as little personal interference as possible. But the anecdotes from Dibble’s life allow the listener to experience Tijuana with new eyes, just as Dibble did after she arrived.

The podcast contains the stories of drug gangs and violence that often dominate the headlines, but beyond that, Dibble creates a portrait of the charm, creativity and resolve that she found in Tijuana and the people who call it home.

NAHJ San Diego-Tijuana sat down with Dibble to talk about what went into the making of her new podcast. Here’s an excerpt of that conversation.

NAHJ SD-TJ: How did the idea for this podcast come about?

SD: I wasn’t thinking of a podcast. That came from Jeff Light (publisher and editor in chief of the San Diego Union-Tribune) and Susan White, who was my editor and co-creator. They came up with the idea that I should do a podcast and then it was like, ‘Well, a podcast about what?’ And so we floated a few ideas and then finally they had the idea like, ‘Oh, it should be about you. You were there a long time. I don’t know any other U.S. journalists who’ve been there that long.’ And so I have a unique perspective. I had the perspective over time that other U.S. journalists don’t have.

NAHJ SD-TJ: What was it like reporting and publishing information about yourself after being a journalist who for so long did the opposite?

SD: It’s weird. It’s a little awkward but if I can get listeners to, somehow through my experiences, feel differently about Tijuana and not just see it as some kind of distant place and not just kind of go, ‘Oh yeah, poverty and drugs and migration,’ then it’s worth it.

NAHJ SD-TJ: But in the podcast you do talk about crime. How do you talk about those moments while also showing the listeners that there’s more to the city?

NAHJ SD-TJ: How did you decide what to include in this narrative that you’re creating from a 30-year time span about the city and about you?

SD: That was the hardest thing about doing this. I worked with this editor called Susan White and she’s a narrative expert. That’s what she does. She’s edited Pulitzers. She’d never done this kind of story before though where you create the narrative from the bottom. There was no obvious ‘Oh, how I married a drug trafficker.’ It’s just 26 years. It’s a memoir, so we just had to build up from nothing. Just think about if somebody said, ‘Hey, the past 26 years of your life, what story would you tell?’ First I just did a timeline of what was going on in Tijuana and a timeline of what was going on in my life and then trying to match and this is what took three years.

NAHJ SD-TJ: In the first episode you read a diary excerpt where you wrote that you don’t know why you‘re leaving your life in DC and moving to Tijuana. Do you look back now, nearly 30 years later, and have an idea of why you made that decision?

SD: I never stopped second guessing, like I should have stayed (in DC). And then life takes its course so you just go with it. I think I felt limited in some ways in DC, I felt it was harder to be who I am. Tijuana just opens a lot of doors. You might not be able to do this in another city, but because it’s Tijuana, yeah, sure. There’s a part (in the podcast) where I joined the opera and never in a million years would I have gotten into the chorus of the Washington opera, but in Tijuana because they were just starting one and had nobody, I got to help launch the Tijuana opera, like what a cool thing to do.

NAHJ SD-TJ: What do you hope listeners will take away from your podcast?

SD: Mostly that Tijuana is an amazing city and that maybe the Tijuana they’ve heard about from a distance might seem daunting, but there’s so much more to it. There’s people striving, there’s people dreaming, there’s people hoping. There’s people who get married and have kids and go to school and lead rich full lives and people who live there care deeply about the city. It is a pathway to the U.S., but not everybody there is on their way to the U.S. There are many people there who would much prefer to live in Tijuana and San Diego and I think that has to be said, too. There’s a sense of community. There’s a sense of being Tijuanense. I didn’t really understand that at first. There’s a real sense of can-do, independent, fierce…It’s a very entrepreneurial creative city and I think you get the flavor from the podcast.

What It Takes To Make a Bilingual Podcast